If you use this blog, please leave a comment - we'd love to know if people are finding it useful!  And if you climb something we haven't, then let us know too (we'll probably want to climb it next time we are here).

In 2017 we returned to Lyngen, and have now updated the blog for that area.  Not least, in separating Kåfjord into two pages - this valley alone offers a fortnight of world class climbing!

While this blog concentrates on the Lyngen area, we've included some information for Senja, Spansdalen and Sørdalen from our visit in 2012. These areas are more comprehensively covered elsewhere on the internet but the information we've provided should give a good idea of what's out there.

We have included updates from Ian Parnell and friends' trip in 2013, as featured in Climb magazine - get hold of a copy!  More can be seen on Ian's blog.  Thanks to Ian for providing info and photos.

We hope you find this site a useful introduction to ice climbing in Northern Norway.

This guideblog is ordered clockwise from the North-east: 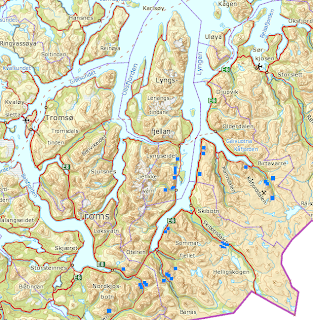 Blue squares = just some of the climbs described on this site
Posted by Nick Harvey at 06:30 2 comments: 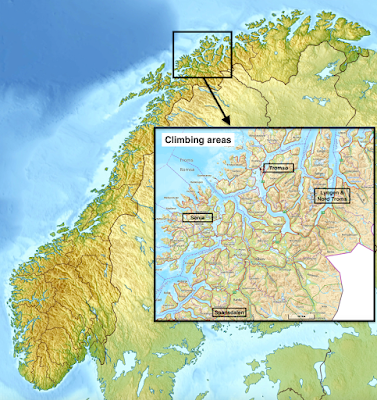 This North Norway Ice Guideblog mainly covers ice climbing in the area east of Tromsø including the Lyngen Alps, shown on the above map as Lyngen & Nord Troms. This area rivals anywhere else we have climbed including Canada, Rjukan and Cogne. We have visited the Lyngen area twice, for 6 weeks in total, in 2011 and 2017.

The blog also includes climbs on the island of Senja and in the Sørdalen / Spansdalen areas, to the southwest of Tromsø, which we visited in 2012. There is quite a lot of info on these areas out there on the web, so we won't cover them here in any great detail.


All photos were taken during those times.  Oh, and in all the weeks in these areas we've only seen one other pair of climbers. You can forget about having to queue!


We don't claim to be experts in the areas but figured that, as little information is available, some people may appreciate reading what we know. We're sure we have not found all the climbing. There will be plenty more to find if you have a sense of adventure. If you do discover more climbing, please let us know so we can include it in our plans for our next visit!


Apart from Hattavarri we are confident that most if not all routes on this blog have been climbed before, mainly by Norwegian ice climbers who, over the years, have been motivated by adventure and have shown little interest in recording their own exploits. In the absence of any published route names we have given some route 'nicknames'.  Please don't think of these as the official route name (if there were such a thing), it just helped us to remember what was what.


For a more detailed account of our trips, have a read our blogs: Jim's blog and Nick's blog.

Flights
Some flights go directly to Tromsø, but many require a change (often at Oslo).  We flew direct from London Gatwick to Tromsø with Norwegian - this was a more expensive way of doing it but worth it for time and hassle saved.

Car hire
There are several car hire companies operating from Tromsø Airport. Like everything in Norway, it isn't very cheap.

Roads
This site allows you to check whether particular roads are closed.
This webpage gives links to webcams on roads across Norway.

And don't drive off the road:

For the Lyngen area, we stayed at Strandbu in Skibotn (N 69deg22.6277, E 20deg16.1243).  They have a variety of cabins accommodating up to six people.  The owner is extremely helpful.  They also have a wood-fired sauna on site.  We absolutely recommend this place!

Skibotn seemed an ideal place to be based.  It is fairly central to the Lyngen climbing areas, with none more than an hour away (with good driving conditions). 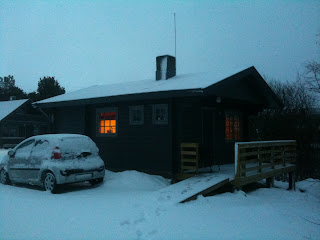 Other options we investigated:

http://www.lyngenlodge.com/ (looks fantastic, not really comparable with the cabin we stayed at - this place has hot tubes, luxury and a boat to drop you off!)
http://www.solvik.no/
http://www.lyngsalpeprodukter.no/

Aadne Olsrud, one of the friendly locals we sought advice from, has opened some apartments in Tamok that are targeted at climbers and skiers.  His Facebook page is worth checking out as another option for somewhere to stay. Search for Olsrud Adventure on FB.

Every town / village seems to have a Co-op or Joker mini-market type store.  There are larger supermarkets in Tromsø (worth going to on way from airport if time allows) and Nordkjosbotn and over the border in Finland. 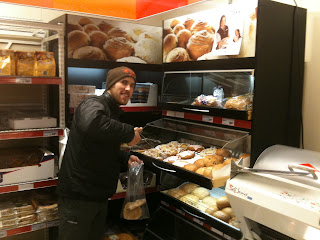 Too early in the year and there is very little daylight.  We had sufficient daylight when we went at the end of February, probably nearing on 12hrs of daylight.  During our visits, temperatures have ranged from +5 to -12degC, but can be much lower.  Check these weather statistics.

Norway has a fantastic weather service that, in our experience, was very geographically specific and quite accurate.  Check the difference between Skibotn, Lyngseidet and Furuflaten - these are all only a few kms apart.
(Edit: for 2012, we found the weather forecast less accurate, a combination of generally very unsettled weather and being closer to the west coast I think)

None of them are really that far in distance or height gain.  The snow had a much bigger effect on our walk-in times, so we haven't given any estimates.  Though something along the lines of "guess, double it and double it again" would have been accurate on some of our days!  Our longest was three hours, not long by Scottish standards.  One climb took two and a half hours of wading to get to and 25mins to get down - it was an icefall named 'Roadside'.  If you are lucky with the snow, most will be quite short. 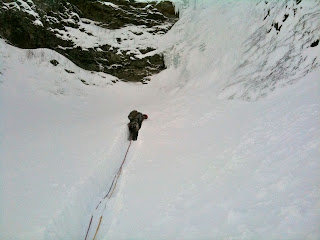 Trenching through the snow basin.

Snowshoes or skis are essential.  We used snowshoes every day we were there.
Most routes are descended via abolokov threads - take plenty of tat.
Binoculars are very useful for spotting climbs and helping to guess how hard they could be!
We did not have avalanche kit, but avalanches are a very real risk.  Lyngen Lodge sometimes post up what they have been up to which may be useful.


This truly brilliant website offers detailed mapping that can be saved and printed.  It is worth printing copies for all the areas listed on this guideblog.  We did not need to 'navigate' at all during our trip.

Ice climbing is dangerous, disclaimer done.  Emergency numbers are 112 and 113.  But have a read of this anyway: http://gravsports.blogspot.com/2011/03/ice-climbing-is-not-rock-climbing.html.  We were told there is a mountain rescue service, including helicopter rescue similar to the UK - don't take our word for it though.


Getting used to the ice: ice-cragging

There are many opportunities for roadside cragging. We tend to do this at the start of a trip to reacquaint ourselves with the ice and to get a feel for ice conditions (low-level at least). One of the best places we've found is on the E6 north of Skibotn.

There are a few bits and pieces on the web about ice climbing in the area.  Some links we found useful are below, but we can't vouch for accuracy. 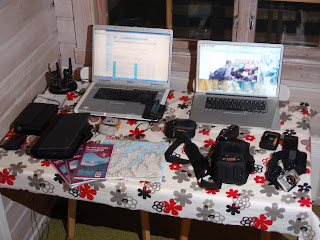 Essential kit? (We go lighter these days. Well, a bit)

The petrol stations sell hotdogs.  Jim swears by them.  Nick swears at them.
Posted by Nick Harvey at 15:18 5 comments:

Inexplicably, every time we climb, we seem to neglect to consider at least one thing.  This prompted me to write the below and thought it may be useful to others.

Remember, this area is relatively remote (certainly in terms of mountain rescue).  Be paranoid about avalanches.

Comms:
Have you told someone where you are going?
Do you have comms (mobile phone or other)?
Posted by Nick Harvey at 01:00 4 comments:

Apologies in advance to any budding ornithologists out there: we are completely hopeless at identifying birds, beyond the common ones found in the UK...

Arctic Northern Norway is rich in wildlife, which can add excitement to any visit there. The landscape is largely untouched by man. Even when driving on the E6, or down the more populated valleys, you're aware of being on the edge of a great wilderness.

The health and variety of wildlife in Arctic Norway is probably best illustrated by the large variety of carnivorous predators at the head of the food chain. There are predators specialising in hunting in the fjords, in the air, and on land. But more of them later - it's enough to say for now that you are not going to be eaten by one. Unless you're very unlucky. 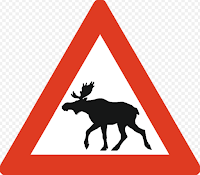 We've seen moose (elk) a few times, most recently a group of 3 large animals crossing the road a couple of hundred yards from our cabin at Skibotn. They are commonly seen - perhaps surprisingly so given the Norwegians' taste for moose burgers - and their tracks are everywhere.

They weigh up to 450kg - watch out for moose road signs and drive carefully near wooded areas...

Sea otters hunt for fish along the shores of Lyngen fjord. We've told that a good place for spotting otter is from the E6 between Skibotn and Birtavarre, where it turns east. We haven't seen any in the Lyngen area yet, though we encountered one walking down the main street of Mefjordvær village, Senja, during our trip in 2012.

Whales and Orca are regularly seen in the area, though many of the whales move south before winter, following the herring migration. You can however see pods of porpoise here in winter, hunting the fjords for fish.
White-tailed eagles hunt the fjords and can be seen on a near-daily basis. They seem to have little fear of people. One swooped low over our car during our 2011 trip. 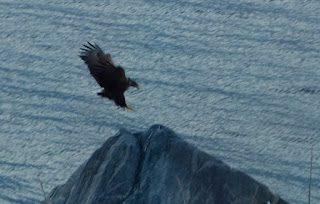 Golden eagles can be seen flying over the dalen, too. Their prey includes Arctic hare and ptarmigan, both of which we saw on our trip in 2017.

Eurasian Lynx and wolverine roam the valleys. There have been sightings in Skibotndalen and Kåfjordalen. These are shy creatures, though, so while you may well see their tracks in the snow you aren't likely encounter the animals themselves. But it's good to know they're there. 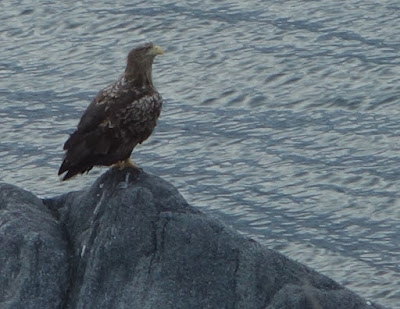 This guideblog was written by Nick Harvey and James Booth.  We're two London based climbers, who are passably competent at this ice climbing business. Maybe, just, and on the seldom occasion we actually get to do it. 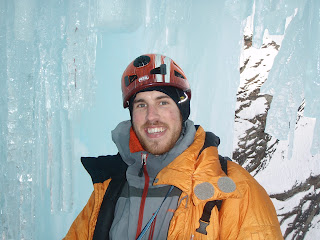 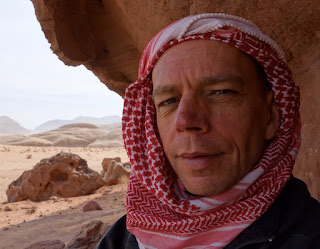 You can contact Nick at nickonice@googlemail.com
Posted by Nick Harvey at 15:13 3 comments:

During our first time in Norway a few people were really helpful and so we would like to thank Stein-Are Engstad, Kjetil Letto and Aadne Olsrud for all their advice that helped make our first trip so successful (and thus enabled us to write this guideblog).

Ian Parnell kindly shared information and photographs from his trip in 2013, which helped to fill in some of the gaps on this blog and provide objectives for our 2017 trip. There's a report of Ian's trip in Climb magazine - get hold of a copy!  More can be seen on Ian's blog.

Thanks are due also to Toby Archer, Johu Risku and Tapio Alhonsuo, and Graham Austick (of Lyngen Lodge) for their advice and putting up with our pestering them for information.

Special thanks go to Neil O'Gorman for all the help and information he gave us in advance of our 2017 trip.
Posted by Nick Harvey at 15:13 1 comment: